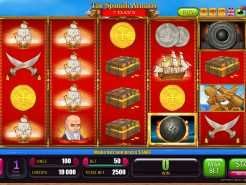 Play Now
7 Days The Spanish Armada is a huge title for a game. It sets the watery scene from the title alone, but does the game give you enough to be interested in as well?

It’s Belatra Games, not one of the bigger software developers, but nonetheless a contributor of several underwater slots online today.

You can try the demo version first if you like

This is usually the best way to get started with any slot game. The first thing you’ll notice is how colorful this one is, but you can see if you like other aspects of it too.

The theme is obvious from the title

Yes, we are in watery territory in the thick of the Spanish Armada here, so you get a real feel for it as you play.

The red, yellow, and blue color scheme works wonderfully. A faded background reveals boats just off the shore, and you’ll see the game screen itself over the top of that. It’s easy to be drawn in to play this one, for sure.

A darkened shield of sorts with fire behind it is the wild icon. This replaces many other icons as shown on the paytable. The scatter is a gong. There is no jackpot to be won in this game, other than the top prize of 25,000 coins if you get five gongs anywhere on the screen.

How many paylines are in this slot game?

There are 100 lines available and they’re all fixed.

The good thing about this slot is that while there are 100 lines available, you only need to wager one coin on each set of two lines, i.e. 50 coins total. You can wager from one to 50 credits per line.

Where is the paytable?

Select the three lines in the bottom left of your screen. Then select the small-case letter I to find it.

No bonus level to unlock in 7 Days The Spanish Armada

Not much more to say about that.

There are some free spins to grab though

To get these, you must find three or more scatters on the screen in one go. That will bring you seven free games. It doesn’t sound too generous, but before the games begin, you get between three and 10 wilds drawn to appear on the screen in set positions. Those wild positions remain where they are for the duration of your spins. The 7 Day part of the game relates to the potential to get some bonus games if you participate daily in the game. You can read more on the paytable if you’re interested in this.

No RTP is known for this

Belatra Games doesn’t seem to have given us the value.

Our rating for this slot

We’re giving this 7 out of 10 as it is a good game to play. However, it would be better with a bonus.

Winners are unlikely to appear in this game

Any slot without a progressive jackpot gets very few headlines, as the progressives tend to grab them instead.

Play the demo to start

You can learn more about the 7 Day feature of the game by playing the demo, and you can see if you like the regular features.

Play for real at casinos offering games from this developer

There are several of them around, so check those out when you have the time.

Available on mobile platforms too

No need to restrict yourself to desktop play if you would rather just play on mobile.
Play Now
Previous slideNext slide

Where to Play 7 Days The Spanish Armada Slots