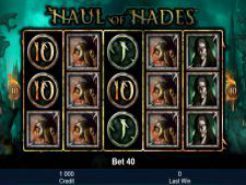 Play Now
Hades is the underworld of Greek mythology. You don’t need to know much about it to check out the Hades Gigablox slot game, although now you know where Hades is, it suggests a theme for this game. The Gigablox element is curious too, so check out the possibilities this slot offers by reading the rest of our report here.

This gaming outfit offers a range of superbly built and presented slot games to eager players. This bodes well for this game too. We know from our first glance at this slot that the title has the usual sharp graphics and tons of detail we have come to expect from Yggdrasil Gaming. All good so far…

Yes, this game boasts a much bigger grid than you might be used to seeing. Despite the larger screen size, the minimum wager is just 10 cents per spin. This means most players should find Hades Gigablox an affordable game to check out. For the record, the reel set offers 50 paylines.

Expect bigger symbols to land on the reels

Let’s find out more about those Gigablox, shall we? The name suggests they might be bigger than the average symbol you see in lots of other slot games. That’s true, too – you can expect to see bigger blocks of 2 x 2 on the reels, along with other sizes ranging up to 6 x 6. This makes it easier to land some prizes over the 50 lines, especially if larger blocks appear on the first two reels. This means you’ve got a chance at finding another matching symbol or block to complete a prize combo.

Find as many as you can, since one spin is granted for each scatter. If you have a block, let’s say a 3 x 3 block, that will count as nine spins. There are win multipliers and further freebies to grab during this round as well. Hades goes up against monsters as you play, with each battle won giving you a higher multiplier with another two spins. So, even if you only get five freebies to begin with, there could be more on the way. Hades Gigablox is worth trying as a demo to start with. It gives you time to see how it pans out. Once you get used to it, you’ll know whether to switch to real play.
Play Now